Almost every hobbyist in the RC car world has heard of Arrma. They are one of the most popular RC car manufacturers. Kraton 6s and 8s are two of their streamlined speed monster trucks that have solid build and speed.

The choice boils down to which form factor you prefer and how much you are willing to spend. Kraton 6s is a 1/8 scale RC car whereas, Kraton 8s is a 1/5 scale RF car. The difference between the cars is $370, Kraton 6s being the cheaper one. In terms of speed and durability, Kraton 6s is better.

This is just a preview into the world of Kratons. There is a lot more information to consider between these two RC cars. If you are interested to know more, we invite you to read our detailed practical comparison of the cars.

So without any further delay, let’s start.

Overview of Kraton 6s and 8s 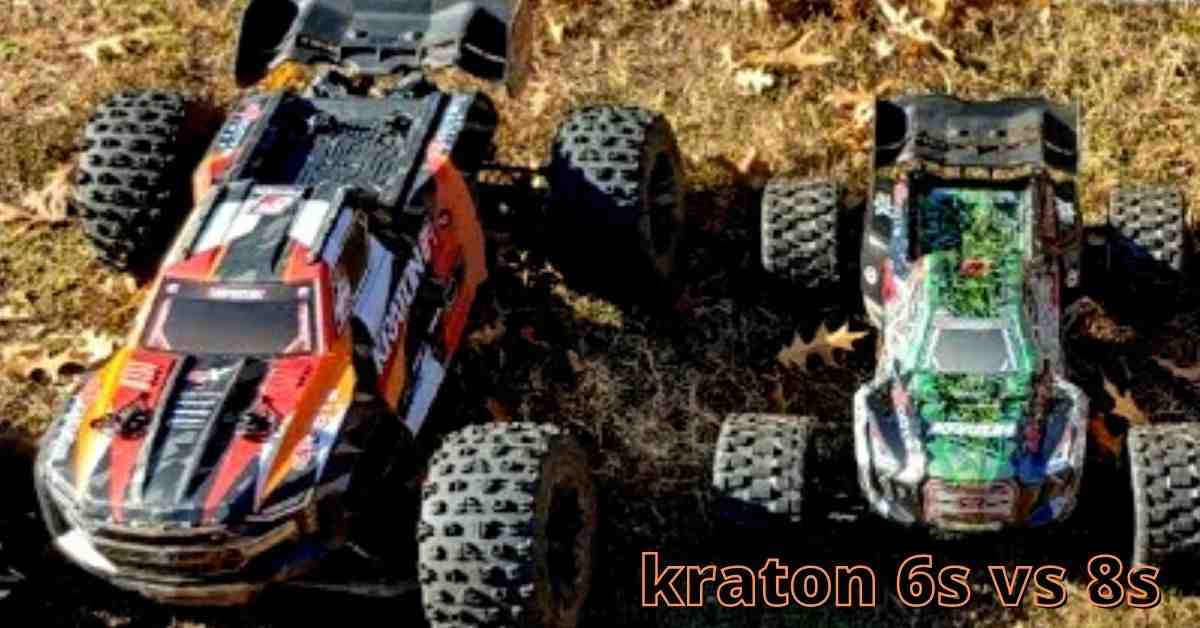 Both Kraton 6s and 8s are manufactured by Arrma, a well-known RC car producer. Currently, Arrma is selling the 5th generation of its Kraton 6s, as it is the more popular model out of the two mentioned.

Both the cars are based on the same model. So, the outlook of the cars is quite similar. Kraton 6s and 8s, both feature metal brushing. The cars have exceptional modding potential.

As the RC cars are built based on the same model, there is not much to talk about their looks. But they have some key differences that set them far apart from each other.

Now that you are familiar with the two RC cars. It’s time to go in-depth with the comparison. We tried not to suffocate you with technical information here. We chose to compare the two cars on a rather practical basis.

Here is the comprehensive practical comparison between Kraton 6s and 8s –

Being a bigger RC car, Kraton 8s sure turns a lot of heads. But Kraton 6s is very popular among enthusiasts due to its compact form factor.

If we compare it with a 1/10 scale RC car, both the cars are quite bigger. Here are a few popular 1/10 RC cars from Arrma that we recommend –

Kraton 8s has an approximately 6 inches larger wheelbase too.

In terms of speed, Kraton 6s take the upper hand. It can comfortably hit 60+ MPH compared to the advertised 55+ MPH of the Kraton 8s.

But in real-life tests, Kraton 8s has managed to hit a top speed of only 42 MPH, which is considerably low.

Both the RC cars have good control mechanisms. But as Kraton 8s is quite bigger than 6s, it is comparatively harder to control on uneven surfaces.

Also, you need to be very careful while running it as small bumps can have a destructive impact on this RC car.

So, in terms of controlling, Kraton 6s is slightly better when compared to Kraton 8s. Due to its compact size and lightweight body, 6s gets better control.

Price is a segment where the majority decides on a particular RC car. Let’s address the elephant in the room. Kraton 6s is $370 cheaper than the Kraton 8s. The big brother comes at a price point of $969.99.

Whereas, the smaller Kraton 6s 5V has a price tag of $599.99. Neither of the RC cars is cheap as per se. As Kraton 8s is the bigger car, you should have seen this enormous price tag coming already.

If you are looking for a much inexpensive RC car, you may check out our following recommendation list –

In terms of durability, we again will stand on the same side with the Kraton 6s. As it is compact and lightweight, the chances of it getting destroyed in a crash are significantly lower compared to the larger cars.

Kraton 8s is the bigger car. So, it is more likely to get destroyed in a crash. A car with a price tag of almost a grand should have better durability than this.

As the components of Kraton 8s is larger and the car is more prone to accidents, repair cost for 8s will be a lot more than 6s. This is yet another reason to go for the smaller car. Repair costs are always moderate with such cars.

There’s no way we would recommend Kraton 8s over Kraton 6s. To us, Kraton 6s is a superior RC car in every aspect. Sure, Kraton 8s will turn a lot of heads. But we are not comfortable recommending this car.

If you like big RC cars, you can go with Kraton 8s. But trying to run is slow and safe to avoid extra repair expenses.

Yes, you can. Kraton 6s is an excellent RC car to mod.

Which is the better value, Krator 6s or 8s?

This boils down to personal preference. But to us, Kraton 6s provides a much better value.

Now that you are aware of the difference between – Kraton 6s vs 8s, we hope you would be able to make a choice. If you are still confused, find someone in your neighborhood who owns the RC cars and give them a try.

Thanks for sticking to the end. Best of luck!